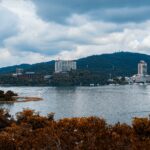 Upon arrival at Taoyuan International Airport (TPE), you will be met and transferred to your accommodation hotel by private car (no guide).
The remainder of the day will be free.
Hotel options:
Grand Hyatt Taipei, Regent Taipei, or Palais de Chine Hotel (5*)
Howard Plaza Hotel or The Landis Taipei (4*)
Gala Hotel, Taipei or Golden China Hotel, Taipei (3*)

After breakfast, we will take a tour of Taipei city includes the impressive Chiang   Kai-Shek Memorial Hall, National Palace Museum where 5,000 years of
Chinese imperial arts and jade collections are exhibited, Martyrs’ Shrine of traditional architecture and change of Honor Guards, a local Taiwanese temple,
and Taipei Handicraft Center. The remainder of the day will be free on your own.
Hotel options:
A.  Grand Hyatt Taipei, Regent Taipei, or Palais de Chine (5*)
Howard Plaza Hotel or The Landis Taipei (4*)
C.  Gala Hotel, Taipei or Golden China Hotel, Taipei (3*).

To be picked up at the lobby of a hotel in Taipei City, we will drive to Sun Moon Lake which is located in the middle of Taiwan and situated 762 meters above sea level in the lofty mountains of Central Taiwan. Tour will stop at the famous Wenwu Temple, also known as Literature-Warrior Temple, dedicated to Confucius as Master of Pen and to Kuan Ti as Master of Sword, Holy Monk Shrine, and Ci En Pagoda. After touring around Sun Moon Lake, check-in at the hotel.
Enjoy a natural hot spring at the Fleur de Chine Hotel, Sun Moon Lake.
You can also enjoy the walking trails, biking, hiking, or boating at the lake.
Hotel: Fleur De Chine – Mountain View Room (5*) or similar

Check out from the hotel, passing by the lovely small and old Jiji Railway Station, drive to Fo Guang Shan Buddhist Monastery, the most famous Buddhist sacred place of southern Taiwan. Here you will learn about Buddhism during the monastery walking tour to visit “Buddha Memorial Center” and communicate with some of the monks or nuns during the visit, there will be the opportunity to taste Buddhist vegetarian lunch (at your own cost). Continuously, we will drive to Kaohsiung which is the second-largest city in Taiwan. The tour will take you to Love River and Liuhe Night Market. Overnight stay at Kaohsiung.
Hotel: Grand Hi-Lai Hotel, Kaohsiung (5*) or similar

After breakfast, it will be an exciting East Coast Tour. The East Coast National Scenic Area, known as "Taiwan's last unspoiled land", stretches 170 kilometers down the east coast of the island. Weathering, erosion, and accumulation have produced a wide range of landforms here. Our tour will stop at Xiaoyeliu, Sanxiantai, Shitiping (Stone Steps), marble factory, and showroom.
Late afternoon, we will proceed to Hualien for an overnight stay at Taroko National Park.
Hotel: Silks Place Taroko (5*) or similar

After breakfast, we will make a visit to Taroko National Park. Taroko Gorge is an exceptionally beautiful, narrow raving created by the Liwu river which has cut deep into the mountains of solid marble. A road carved into sheer walls of rock rewinding its way past forested peaks and cliffs towering thousands of feet above it, while hundreds of feet below a river roars past gigantic marble boulders. Passing by Tunnel of Nine Turns, Ci Mu Bridge, stops will be made at Swallow Grotto, and Changchun Temple (Eternal Spring Shrine). We will then drive back to Taipei with a stop at Cingshui Cliff, drive through
Syue-Shan Long Tunnel (12.9 Kms) to arrive at around 6 PM.
Hotel options:
Grand Hyatt Taipei, Regent Taipei, or Palais de Chine Hotel (5*)
Howard Plaza Hotel or The Landis Taipei (4*)
C.  Gala Hotel, Taipei or Golden China Hotel, Taipei (3*)

At leisure until check out and you will be transferred to the airport for departure flight by private car (no guide).