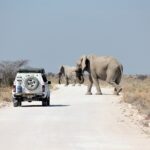 Arrive at the Victoria Falls Airport where you will be met and transferred to your hotel.
The Victoria Falls Hotel is also known as “the grand old lady of the Falls” and is situated in the Victoria Falls National Park.
The Edwardian-style five-star hotel built in 1904 but was recently redecorated and refurbished and now combines the charm of the old with the convenience of the new. Set in lush tropical gardens with lily ponds, palm trees and semi-tropical shrubs, it provides the tranquillity and seclusion that many guests seek.

The Livingstone Room for fine dining and dancing, the Jungle Junction with its famous breakfast and dinner buffets and ethnic entertainment in the evenings offer variety and wide choice. Stanley’s Terrace is renowned for its cocktails and afternoon teas.

The hotel has 161 rooms that are air conditioned with every modern amenity including digital satellite television and a personal safe. The old fashioned bath tubs of the stable wing turn the bathroom into a haven of relaxation. The corridors reflect and tell the history of this unique part of Africa, with particular reference to the building of the railway from Cape Town to what is now Zambia. It is very much part of the unrealised “Cape to Cairo” dream of Cecil John Rhodes.

Continue to the Kongola area.
Nambwa Lodge is situated in the Zambezi Region of Namibia, on the banks of the Kwando River, within Bwabwata National Park. This area is located within the heart of the Kavango Zambezi Trans Frontier Conservation Area (KAZA) - an initiative of the large Peace Park foundation.

The lodge provides a sanctuary for more than 35 large and small game species and upwards of 330 bird species. These animals move freely throughout the area which creates a mecca for wildlife viewing.

Because of a partnership with the Mayuni Conservancy and Ministry of Environment and Tourism, the lodge is able to offer traversing rights to over 300,000 hectares where we can spot these lovely creatures. Nambwa Lodge is also the only lodge in the area approved for game night drives.

Continue along the Caprivi Strip to the Popa Falls area.

Nunda, the local Thimbukushu name given to the fruit of the Jackalberry tree, is situated on the Kavango River in the land of the proud Hambukushu people. They are ruled by their Fumu (King) and largely maintain their traditional way of life. Two kilometres west of the Lodge lay one of the scenic highlights of Western Caprivi, the Popa Falls. More rapids than falls, the Kavango River breaks through a four meter high rocky intrusion amidst islands dotted with pristine forests surrounded by aquatic vegetation.

Accommodation consist of 7 large, comfortable, tastefully furnished Meru tents with en-suite facilities built on wooden decks as well as 7 large thatched, twin bed en-suite chalets. All units have covered decks which overlook the river. Each unit is set amongst huge trees and shrubs offering privacy and seclusion.
The lapa complex consists of an exquisitely furnished thatched restaurant, bar, curio shop, lounge and reception area. A large wooden deck overlooks the river and it is here where one can enjoy sundowners while watching spectacular sunsets, with an abundance of birdlife.

Optional activities include guided game drives, boat cruises, angling expeditions and traditional Mokoro canoe trips down the river. Guided birding and nature walks are a rewarding experience, as is the cultural walks through traditional villages

Continue to the eastern side of the Etosha National Park today.

Sharing the eastern border of the Etosha National Park, Onguma Game Reserve is a beguiling mixture of sophistication and relaxation, of elegance and the earth. In the local Herero language, Onguma means 'the place you don't want to leave', and the 34 000-hectare reserve certainly lives up to its name.

Onguma Tented Camp has a stunning main building and seven tents providing private, exclusive accommodation and making it a place you won't want to leave. The seven spacious tents extend the U-shaped design, allowing both for privacy and for fantastic views. Each tent was designed with attention to detail and has an indoor and an outdoor shower, a gorgeous modern interpretation of an old zinc bath, a separate toilet, two stone basins and a private sitting area with uninterrupted views of the waterhole.

The Etosha National Park consist of 22 270 km of saline desert, Savannah and woodlands and is one of the largest parks in Africa. Its definitive feature is the Etosha Pan, a vast, shallow depression of approximately 5 000 km. Of the 114 mammal species found in the park, several are rare and endangered, such as black rhino and black-faced impala.

The latter is endemic to North Western Namibia and South Western Angola. Etosha’s current population of approximately 300 black rhinos represents one of the few growing populations in the world. Their elephants are reputed to be of the largest in Africa, the tallest ones measuring up to 4 m at the shoulder. Their tusks, on the other hand, are relatively small, due to genetic defects and mineral deficiencies in their diet.

Continue to Okonjima today.
Okonjima Bush Camp is approximately 3 km from the Main Camp and at the edge of a wilderness area.

The Bush Camp has 8 thatched African-style chalets and 1 luxury, honeymoon suite (wheel-chair friendly). Each exclusive chalet enjoys complete privacy and is a combination of earthy, ochre walls and khaki-green canvas, under a thatched roof.

The Honeymoon Suite boasts a stunning view, a sliding glass door, 2 Queen-size beds, and a comfortable en-suite lounge with fire-place, a bath and outside 'bush' shower. All other chalets have mini-bars, telephone, private safe, a queen-size bed as well as a 3/4 bed and are 80m-100m apart from each other. There is also a secluded pool.

Activities commence 15h00 in winter and 16h00 in summer and are as follows:
Cheetah tracking on foot and the Cheetah Project; Leopard tracking; Birding; Photography and the Bushmen trail.

Drive to Windhoek, the capital city of Namibia today. Drop off your rental vehicle in the afternoon.

This castle, build at the turn of the 20th century by Count von Schwerin for his fiancé, Margarethe von Heinitz, offers accommodation in plush romantic elegance. The Raith family have preserved and complimented his vision to combine comfort with luxurious charm. Perched high above Windhoek, Leo's Restaurant offers spectacular vistas of the city lights below, not to mention unrivalled African sunsets. Savour masterfully prepared game dishes and relish fine wines from Namibia's largest private wine cellar

Get transferred to the Hosea Kutako International Airport, in time for your outbound flight.